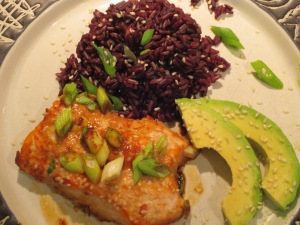 I rarely cook fish at home, for a lot of reasons which I won’t bore you with, but there are a few I’ll mention here now.  One is Colin.  He doesn’t like it. Give him a plate of sushi or a platter of pickled or smoked fish and he’s a very happy man (he’s not even Jewish!).  But once cooked, he won’t go near it with a ten foot pole.  Also and probably in part because of the fact that I don’t cook it often, I’m afraid to.  Fish is so easy to overcook and dry out, who wants to spend the money, time and effort to just end up ruining it? Not me.  And lastly, it almost goes without saying, it tends to stink up the place and the aforementioned Colin, hater of all cooked fish, really detests the smell of it.  BUT, Skyler LOVES cooked Salmon and begs me regularly to make it.  I’ve been able to get away without for some time, since thankfully my dad prepares it often for us, but not often enough for Skyler.  Now, finally I have discovered a perfectly easy way to cook salmon in my house without the smell, really it’s true.  Slow roasting in the oven at a low temperature, bathed in marinade, Salmon cooks up moist and delicious with absolutely no fishy odor, absolutely none.

I came up with this super simple marinade years ago and it has been a family favorite ever since.  With just a few ingredients this marinade is so flavorful and is not only perfect for salmon, but chicken too which makes it great for dinner parties and extended family gatherings, where so many different people need to be pleased! When the weather’s warm we forgo the oven and make this on the grill, which is actually how it all began years ago.

2 Servings, but the recipe easily multiplies to feed more

I like to remove the skin from my salmon fillet (but only if roasting in the oven, when grilling outside I leave the skin on), but this is purely a personal choice, if you like the skin by all means leave it on.

To remove the skin, place the fillet on a cutting board skin side down (I usually leave it resting on the paper it was wrapped in to keep my board clean) and run a very sharp knife between the skin and flesh, this may take a little bit of effort.  If you’re not a “professional fish skinner”, I find that it makes it easier to cut a large fillet into portions before trying to remove the skin.

Prepare the marinade by mixing the Soy Sauce, Water, Sesame Oil and grated Ginger in a small bowl or directly in the dish you plan to roast in (I use an 8 inch square Pyrex dish).  Place the salmon and marinade in your baking dish.  Sprinkle with sesame seeds and the white and light green pieces of scallion (reserving the dark green pieces for a garnish).

At this point, you can either leave the Salmon to marinade for a little while or longer if you wish to prepare it ahead of time (in which case don’t preheat your oven).  If you’re not going to cook the Salmon fairly soon, cover and place in the refrigerator.

When the oven is ready, put the Salmon bathed in all the marinade in the oven and slow roast for 25-35 minutes, depending upon how large or thick your fillets are and how you like it cooked.  After 20-25 minutes, I check for doneness by cutting a large piece halfway through with a butter knife.  With the marinade and low temperature, unlike a lot of other fish preparations, this is really difficult to overcook.  The marinade also cooks down to create a nice sauce. 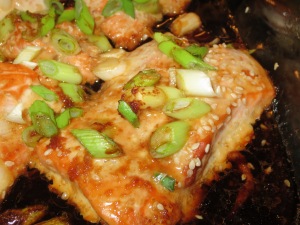 Once cooked to your liking, remove the salmon from the oven and sprinkle the remaining dark green slices of scallion on top and serve.  This is actually quite tasty straight out of the oven or at room temperature.  Enjoy!

Recipe Notes:  If you’ve made enough for a crowd and end up with leftovers, you can keep them refrigerated for a day or two.  I prefer not to reheat any leftovers as I feel like it changes the taste and texture of the salmon a bit, plus reheating in the microwave will stink A LOT.  I just eat leftovers cold, they are delicious over a salad or in a wrap with some sliced avocado.

Unfortunately, I can’t give you cooking times or temps for chicken.

I’ll make your life easy, if cooking for a crowd, here’s the recipe quantities my parent’s use:  Good for about 4-6 pounds combined of Salmon and Chicken breast.  Extra marinade will keep well in the fridge for at least a week.

Soy Ginger Marinade for a Crowd:

I'd love to know what you think....please feel free to leave a reply Cancel reply

My name is Jen and I never met a recipe I didn’t want to change. I view recipes as inspirational guidelines, not rules to follow. I hope you find some delicious healthy recipes that inspire you to cook and eat and feel free to change at will. If you enjoy what you see, please feel free to subscribe, you’ll receive recipes as my life and time permits and I promise not to fill your inbox or your tummies with any junk. Enjoy!

i love getting feedback, here are some of your most recent comments…